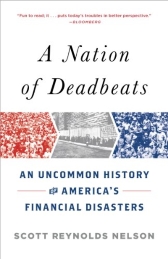 The story of America is a story of dreamers and defaulters.  It is also a story of dramatic financial panics that defined the nation, created its political parties, and forced tens of thousands to escape their creditors to new towns in Texas, Florida, and California.  As far back as 1792, these panics boiled down to one simple question: Would Americans pay their debts—or were we just a nation of deadbeats?

From the merchant William Duer’s attempts to speculate on post–Revolutionary War debt, to an ill-conceived 1815 plan to sell English coats to Americans on credit, to the debt-fueled railroad expansion that precipitated the Panic of 1857, Scott Reynolds Nelson offers a crash course in America’s worst financial disasters—and a concise explanation of the first principles that caused them all.

Nelson shows how consumer debt, both at the highest levels of finance and in the everyday lives of citizens, has time and again left us unable to make good.The problem always starts withthe chain of banks, brokers, moneylenders, and insurance companies that separate borrowers and lenders.  At a certain point lenders cannot tell good loans from bad—and when chits are called in, lenders frantically try to unload the debts, hide from their own creditors, go into bankruptcy, and lobby state and federal institutions for relief.

With a historian’s keen observations and a storyteller’s nose for character and incident, Nelson captures the entire sweep of America’s financial history in all its utter irrationality: national banks funded by smugglers; fistfights in Congress over the gold standard; and presidential campaigns forged in stinging controversies on the subject of private debt. A Nation of Deadbeats is a fresh, irreverent look at Americans’ addiction to debt and how it has made us what we are today.
Show more
Show less

Ages of American Capitalism: A History of the United States

The Idea Factory: Bell Labs and the Great Age of American Innovation