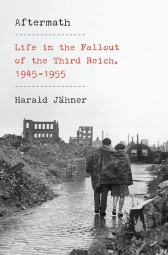 A revelatory history of the transformational decade that followed World War II, when Germany raised itself out of the ashes of defeat, turned away from fascism, and reckoned with the corruption of its soul and the horrors of the Holocaust. This book received wide acclaim and spent forty-eight weeks on the best-seller list in Germany when it was published there in 2019.

The years 1945 to 1955 were a raw, wild decade that found many Germans politically, economically, and morally bankrupt. Victorious Allied forces occupied the four zones that make up present-day Germany. More than half the population was displaced; 10 million newly released forced laborers and several million prisoners of war returned to an uncertain existence. Cities lay in ruins—no mail, no trains, no traffic—with bodies yet to be found beneath the towering rubble.

Aftermath is the first history of Germany’s national mentality in the immediate postwar years. Using major global political developments as a backdrop—and including eye-opening black-and-white photographs and posters—Harald Jähner weaves a series of life stories into a nuanced panorama of a nation undergoing monumental change. Poised between two eras, this decade is portrayed by Jähner as a period that proved decisive for Germany’s future—and one starkly different from how most of us imagine it today.Aftermath helps to answer the question: “How does a nation recover from fascism and turn toward a free society once more?”
Show more
Show less