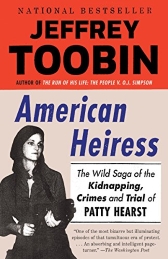 From New Yorker staff writer and bestselling author of The Nine and The Run of His Life: The People v. O. J. Simpson, the definitive account of the kidnapping and trial that defined an insane era in American history

On February 4, 1974, Patty Hearst, a sophomore in college and heiress to the Hearst Family fortune, was kidnapped by a ragtag group of self-styled revolutionaries calling itself the Symbonese Liberation Army. The weird turns that followed in this already sensational take are truly astonishing–the Hearst family tried to secure Patty’s release by feeding the people of Oakland and San Francisco for free; bank security cameras captured “Tania” wielding a machine gun during a roberry;

the LAPD engaged in the largest police shoot-out in American history; the first breaking news event was broadcast live on telelvision stations across the country; and then there was Patty’s circuslike trial, filled with theatrical courtroom confrontations and a dramatic last-minute reversal, after which the term “Stockholm syndrome” entered the lexicon.

Ultimately, the saga highlighted a decade in which America seemed to be suffering a collective nervous breakdown. American Heiress portrays the electrifying lunacy of the time and the toxic mic of sex, politics, and violence that swept up Patty Hearst and captivated the nation.
Show more
Show less

The Code Breaker: Jennifer Doudna, Gene Editing, and the Future of the Human Race

Begin Again: James Baldwin’s America and Its Urgent Lessons for Our Own

The Bin Ladens: An Arabian Family in the American Century