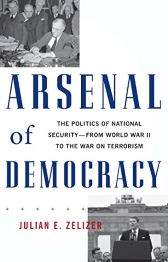 It has long been a truism that prior to George W. Bush, politics stopped at the water’s edge — that is, that partisanship had no place in national security. In Arsenal of Democracy, historian Julian E. Zelizer shows this to be demonstrably false: partisan fighting has always shaped American foreign policy and the issue of national security has always been part of our domestic conflicts. Based on original archival findings, Arsenal of Democracy offers new insights into nearly every major national security issue since the beginning of the cold war: from FDR’s masterful management of World War II to the partisanship that scarred John F. Kennedy during the Cuban Missile Crisis, from Ronald Reagan’s fight against Communism to George W. Bushrues controversial War on Terror. A definitive account of the complex interaction between domestic politics and foreign affairs over the last six decades, Arsenal of Democracy is essential reading for anyone interested in the politics of national security.

Sandworm: A New Era of Cyberwar and the Hunt for the Kremlin’s Most Dangerous Hackers