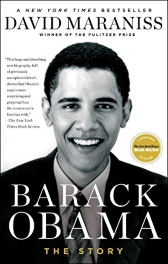 The groundbreaking multigenerational biography, a richly textured account of President Obama and the forces that shaped him and sustain him, from Pulitzer Prize–winning reporter, political commentator, and acclaimed biographer David Maraniss.

In Barack Obama: The Story, David Maraniss has written a deeply reported generational biography teeming with fresh insights and revealing information, a masterly narrative drawn from hundreds of interviews, including with President Obama in the Oval Office, and a trove of letters, journals, diaries, and other documents.

The book unfolds in the small towns of Kansas and the remote villages of western Kenya, following the personal struggles of Obama’s white and black ancestors through the swirl of the twentieth century. It is a roots story on a global scale, a saga of constant movement, frustration and accomplishment, strong women and weak men, hopes lost and deferred, people leaving and being left. Disparate family threads converge in the climactic chapters as Obama reaches adulthood and travels from Honolulu to Los Angeles to New York to Chicago, trying to make sense of his past, establish his own identity, and prepare for his political future.

Barack Obama: The Story chronicles as never before the forces that shaped the first black president of the United States and explains why he thinks and acts as he does. Much like the author’s classic study of Bill Clinton, First in His Class, this promises to become a seminal book that will redefine a president.

Author in Chief: The Untold Story of Our Presidents and the Books They Wrote

The President’s Man: The Memoirs of Nixon’s Trusted Aide

A Man of Iron: The Turbulent Life and Improbable Presidency of Grover Cleveland