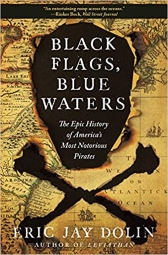 Set against the backdrop of the Age of Exploration, Black Flags, Blue Waters reveals the surprising history of American piracy’s “Golden Age” – spanning the late 1600s through the early 1700s – when lawless pirates plied the coastal waters of North America and beyond. “Deftly blending scholarship and drama” (Richard Zacks), best-selling author Eric Jay Dolin illustrates how American colonists at first supported these outrageous pirates in an early display of solidarity against the Crown, and then violently opposed them.

History Ago Go Most Notorious! A True Crime History Podcast Under the Crossbones – A Pirate Podcast