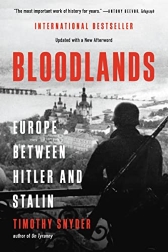 From the author of the international bestseller On Tyranny, the definitive history of Hitler’s and Stalin’s politics of mass killing, explaining why Ukraine has been at the center of Western history for the last century.

Americans call the Second World War “the Good War.” But before it even began, America’s ally Stalin had killed millions of his own citizens—and kept killing them during and after the war. Before Hitler was defeated, he had murdered six million Jews and nearly as many other Europeans. At war’s end, German and Soviet killing sites fell behind the Iron Curtain, leaving the history of mass killing in darkness.

Assiduously researched, deeply humane, and utterly definitive, Bloodlands is a new kind of European history, presenting the mass murders committed by the Nazi and Stalinist regimes as two aspects of a single story. With a new afterword addressing the relevance of these events to the contemporary decline of democracy, Bloodlands is required reading for anyone seeking to understand the central tragedy of modern history and its meaning today.
Show more
Show less

The Dressmakers of Auschwitz: The True Story of the Women Who Sewed to Survive