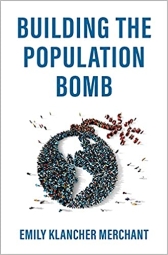 Across the twentieth century, Earth’s human population increased undeniably quickly, rising from 1.6 billion people in 1900 to 6.1 billion in 2000. As population grew, it also began to take the blame for some of the world’s most serious problems, from global poverty to environmental degradation, and became an object of intervention for governments and nongovernmental organizations. But the links between population, poverty, and pollution were neither obvious nor uncontested.

Building the Population Bomb tells the story of the twentieth-century population crisis by examining how scientists, philanthropists, and governments across the globe came to define the rise of the world’s human numbers as a problem.

It narrates the history of demography and population control in the twentieth century, examining alliances and rivalries between natural scientists concerned about the depletion of the world’s natural resources, social scientists concerned about a bifurcated global economy, philanthropists aiming to preserve American political and economic hegemony, and heads of state in the Global South seeking rapid economic development. It explains how these groups forged a consensus that promoted fertility limitation at the expense of women, people of color, the world’s poor, and the Earth itself.

As the world’s population continues to grow–with the United Nations projecting 11 billion people by the year 2100–Building the Population Bomb steps back from the conventional population debate to demonstrate that our anxieties about future population growth are not obvious but learned. Ultimately, this critical volume shows how population growth itself is not a barrier to economic, environmental, or reproductive justice; rather, it is our anxiety over population growth that distracts us from the pursuit of these urgent goals.

The Age of Entitlement: America Since the Sixties

Dead Famous: An Unexpected History of Celebrity from Bronze Age to Silver Screen