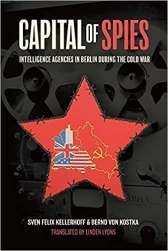 For almost half a century, the hottest front in the Cold War was right across Berlin. From summer 1945 until 1990, the secret services of NATO and the Warsaw Pact fought an ongoing duel in the dark. Throughout the Cold War, espionage was part of everyday life in both East and West Berlin, with German spies playing a crucial part of operations on both sides: Erich Mielke’s Stasi and Reinhard Gehlen’s Federal Intelligence Service, for example.

The construction of the wall in 1961 changed the political situation and the environment for espionage—the invisible front was now concreted and unmistakable.

But the fundamentals had not changed: Berlin was and would remain the capital of spies until the fall of the Berlin Wall, a fact which makes it all the more surprising that there are hardly any books about the work of the secret services in Berlin during the Cold War. Journalist Sven Felix Kellerhoff and historian Bernd von Kostka describe the spectacular successes and failures of the various secret services based in the city.
Show more
Show less