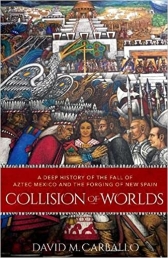 Mexico of five centuries ago was witness to one of the most momentous encounters between human societies, when a group of Spaniards led by Hernando Cortés joined forces with tens of thousands of Mesoamerican allies to topple the mighty Aztec Empire. It served as a template for the forging of much of Latin America and initiated the globalized world we inhabit today. The violent clash that culminated in the Aztec-Spanish war of 1519-21 and the new colonial order it created were millennia in the making, entwining the previously independent cultural developments of both sides of the Atlantic.

Collision of Worlds
provides a deep history of this encounter, one that considers temporal depth in the richly layered cultures of Mexico and Spain, from their prehistories to the urban and imperial societies they built in the fourteenth and fifteenth centuries. Leading Mesoamerican archaeologist David Carballo offers a unique perspective on these fabled events with a focus on the physical world of places and things, their similarities and differences in trans-Atlantic perspective, and their interweaving in an encounter characterized by conquest and colonialism, but also resilience on the part of Native peoples. An engrossing and sweeping account, Collision of Worlds debunks long-held myths and contextualizes the deep roots and enduring consequences of the Aztec-Spanish conflict as never before.
Show more
Show less

Bretons and Britons: The Fight for Identity