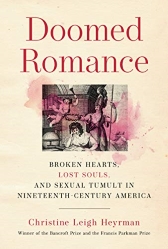 A NEW YORK TIMES NOTABLE BOOK OF THE YEAR • A thwarted love triangle of heartbreak rediscovered after almost two hundred years—two men and a woman of equal ambition—that exploded in scandal and investigation, set between America’s Revolution and its Civil War, revealing an age in subtle and powerful transformation, caught between the fight for women’s rights and the campaign waged by evangelical Protestants to dominate the nation’s culture and politics. From the winner of the Bancroft Prize and the Francis Parkman Prize in History.

At its center—and the center of a love triangle—Martha Parker, a gifted young New England woman, smart, pretty, ambitious, determined to make the most of her opportunities, aspiring to become an educator and a foreign missionary.

Late in 1825, Martha accepted a proposal from a schoolmaster, Thomas Tenney, only to reject him several weeks later for a rival suitor, a clergyman headed for the mission field, Elnathan Gridley. Tenney’s male friends, deeply resentful of the new prominence of women in academies, benevolent and reform associations, and the mission field, decided to retaliate on Tenney’s behalf by sending an anonymous letter to the head of the foreign missions board impugning Martha’s character. Tenney further threatened Martha with revealing even more about their relationship, thereby ruining her future prospects as a missionary. The head of the board began an inquiry into the truth of the claims about Martha, and in so doing, collected letters, diaries, depositions, and firsthand witness accounts of Martha’s character.

The Age of Jackson

Apostles of Revolution: Jefferson, Paine, Monroe, and the Struggle Against the Old Order in America and Europe