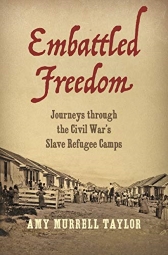 The Civil War was just days old when the first enslaved men, women, and children began fleeing their plantations to seek refuge inside the lines of the Union army as it moved deep into the heart of the Confederacy. In the years that followed, hundreds of thousands more followed in a mass exodus from slavery that would destroy the system once and for all. Drawing on an extraordinary survey of slave refugee camps throughout the country, Embattled Freedom reveals as never before the everyday experiences of these refugees from slavery as they made their way through the vast landscape of army-supervised camps that emerged during the war. Amy Murrell Taylor vividly reconstructs the human world of wartime emancipation, taking readers inside military-issued tents and makeshift towns, through commissary warehouses and active combat, and into the realities of individuals and families struggling to survive physically as well as spiritually.

Narrating their journeys in and out of the confines of the camps, Taylor shows in often gripping detail how the most basic necessities of life were elemental to a former slave’s quest for freedom and full citizenship.

The stories of individuals–storekeepers, a laundress, and a minister among them–anchor this ambitious and wide-ranging history and demonstrate with new clarity how contingent the slaves’ pursuit of freedom was on the rhythms and culture of military life. Taylor brings new insight into the enormous risks taken by formerly enslaved people to find freedom in the midst of the nation’s most destructive war.