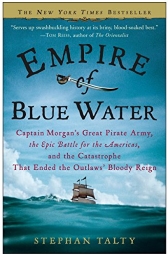 NEW YORK TIMES BESTSELLER • “Talty’s vigorous history of seventeenth-century pirates of the Caribbean [is] a pleasure to read from bow to stern.”—Entertainment Weekly

“In Stephan Talty’s hands, the brilliant Captain Morgan, wicked and cutthroat though he was, proves an irresistible hero. . . . A thrilling and fascinating adventure.”—Caroline Alexander, author of The Endurance and The Bounty

The passion and violence of the age of exploration and empire come to vivid life in this story of the legendary pirate who took on the greatest military power on earth with a ragtag bunch of renegades. Awash with bloody battles, political intrigues, natural disaster, and a cast of characters more compelling, bizarre, and memorable than any found in a Hollywood swashbuckler, Empire of Blue Water brilliantly re-creates the life and times of Henry Morgan and the real pirates of the Caribbean.

Under the Crossbones – A Pirate Podcast

In the Kingdom of Ice: The Grand and Terrible Polar Voyage of the USS Jeannette