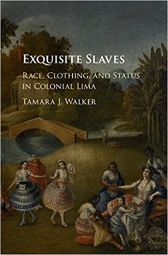 In Exquisite Slaves, Tamara J. Walker examines how slaves used elegant clothing as a language for expressing attitudes about gender and status in the wealthy urban center of eighteenth- and nineteenth-century Lima, Peru. Drawing on traditional historical research methods, visual studies, feminist theory, and material culture scholarship, Walker argues that clothing was an emblem of not only the reach but also the limits of slaveholders’ power and racial domination. Even as it acknowledges the significant limits imposed on slaves’ access to elegant clothing, Exquisite Slaves also showcases the insistence and ingenuity with which slaves dressed to convey their own sense of humanity and dignity. Building on other scholars’ work on slaves’ agency and subjectivity in examining how they made use of myriad legal discourses and forums, Exquisite Slaves argues for the importance of understanding the body itself as a site of claims-making.

The Lost City of the Monkey God

The Wizard and the Prophet: Two Remarkable Scientists and Their Dueling Visions to Shape Tomorrow’s World