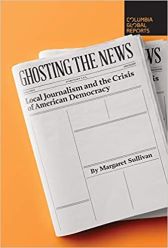 “An excellent introduction to the essential problem of our republic. With a wake-up call like this one, we still have a chance.”–Timothy Snyder, author of On Tyranny

An Epidemic of News Deserts and Ghost Papers

Ghosting the News tells the most troubling media story of our time: How democracy suffers when local news dies. From 2004 to 2015, 1,800 print newspaper outlets closed in the US. One in five news organizations in Canada has closed since 2008. One in three Brazilians lives in news deserts. The absence of accountability journalism has created an atmosphere in which indicted politicians were elected, school superintendents were mismanaging districts, and police chiefs were getting mysterious payouts. This is not the much-discussed fake-news problem–it’s the separate problem of a critical shortage of real news.

America’s premier media critic, Margaret Sullivan, charts the contours of the damage, and surveys a range of new efforts to keep local news alive–from non-profit digital sites to an effort modeled on the Peace Corps. No nostalgic paean to the roar of rumbling presses, Ghosting the News instead sounds a loud alarm, alerting citizens to a growing crisis in local news that has already done serious damage.

The Vermont Conversation with David Goodman
“The Crisis of American Democracy:” WaPo media columnist Margaret Sullivan on the collapse of local journalism
7/15/20         26 min

Antisocial: Online Extremists, Techno – Utopians, and the Hijacking of the American Conversation

It Was All a Lie: How the Republican Party Became Donald Trump

The Precipice: Existential Risk and the Future of Humanity

Nothing to Envy: Ordinary Lives in North Korea