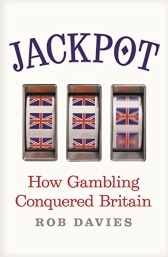 The history of British gambling is a history that stretches back nearly 1,000 years, reaching into some of the nation’s most fabled periods. It’s now an industry worth billions of pounds.

Investigative journalist and Guardian correspondent Rob Davies surveys the development of the gambling industry to explain how the Britain became one of the largest gambling markets in the world. From the turn to deregulation under the Blair administration and the resultant explosion of gambling advertising to predatory targeting and industry lobbying in the halls of power, Davies uncovers the sinister inner workings of one of the country’s most nefarious industries.

Exploring the fate of gambling in the UK and the uncertain future of the thousands of victims who have been all but abandoned along the way, Jackpot is a stark and vital investigation that forces us to confront deeply disturbing truths about modern British society.

The BBC: A Century on Air

The Meaning of Everything: The Story of the Oxford English Dictionary