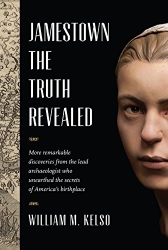 What was life really like for the band of adventurers who first set foot on the banks of the James River in 1607? Important as the accomplishments of these men and women were, the written records pertaining to them are scarce, ambiguous, and often conflicting. In Jamestown, the Truth Revealed, William Kelso takes us literally to the soil where the Jamestown colony began, unearthing footprints of a series of structures, beginning with the James Fort, to reveal fascinating evidence of the lives and deaths of the first settlers, of their endeavors and struggles, and new insight into their relationships with the Virginia Indians. He offers up a lively but fact-based account, framed around a narrative of the archaeological team’s exciting discoveries.

Unpersuaded by the common assumption that James Fort had long ago been washed away by the James River, William Kelso and his collaborators estimated the likely site for the fort and began to unearth its extensive remains, including palisade walls, bulwarks, interior buildings, a well, a warehouse, and several pits. By Jamestown’s quadricentennial over 2 million objects were cataloged, more than half dating to the time of Queen Elizabeth and King James.

Kelso’s work has continued with recent excavations of numerous additional buildings, including the settlement’s first church, which served as the burial place of four Jamestown leaders, the governor’s rowhouse during the term of Samuel Argall, and substantial dump sites, which are troves for archaeologists. He also recounts how researchers confirmed the practice of survival cannibalism in the colony following the recovery from an abandoned cellar bakery of the cleaver-scarred remains of a young English girl. CT scanning and computer graphics have even allowed researchers to put a face on this victim of the brutal winter of 1609–10, a period that has come to be known as the “starving time.”

Refuting the now decades-old stereotype that attributed the high mortality rate of the Jamestown settlers to their laziness and ineptitude, Jamestown, the Truth Revealed produces a vivid picture of the settlement that is far more complex, incorporating the most recent archaeology and using twenty-first-century technology to give Jamestown its rightful place in history, thereby contributing to a broader understanding of the transatlantic world.

The Witches: Suspicion, Betrayal, and Hysteria in 1692 Salem

American Dialogue: The Founders and Us