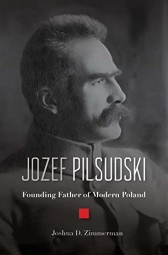 The story of the enigmatic Jozef Pilsudski, the founding father of modern Poland: a brilliant military leader and high-minded statesman who betrayed his own democratic vision by seizing power in a military coup.

In the story of modern Poland, no one stands taller than Jozef Pilsudski. From the age of sixteen he devoted his life to reestablishing the Polish state that had ceased to exist in 1795. Ahead of World War I, he created a clandestine military corps to fight Russia, which held most Polish territory. After the war, his dream of an independent Poland realized, he took the helm of its newly democratic political order. When he died in 1935, he was buried alongside Polish kings.

Yet Pilsudski was a complicated figure. Passionately devoted to the idea of democracy, he ceded power on constitutional terms, only to retake it a few years later in a coup when he believed his opponents aimed to dismantle the democratic system. Joshua Zimmerman’s authoritative biography examines a national hero in the thick of a changing Europe, and the legacy that still divides supporters and detractors. The Poland that Pilsudski envisioned was modern, democratic, and pluralistic. Domestically, he championed equality for Jews. Internationally, he positioned Poland as a bulwark against Bolshevism. But in 1926 he seized power violently, then ruled as a strongman for nearly a decade, imprisoning opponents and eroding legislative power.

In Zimmerman’s telling, Pilsudski’s faith in the young democracy was shattered after its first elected president was assassinated. Unnerved by Poles brutally turning on one another, the father of the nation came to doubt his fellow citizens’ democratic commitments and thereby betrayed his own. It is a legacy that dogs today’s Poland, caught on the tortured edge between self-government and authoritarianism.