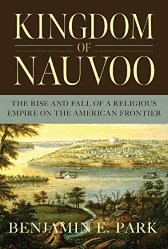 In Kingdom of Nauvoo, Benjamin E. Park draws on newly available sources to re-create the founding and destruction of the Mormon city of Nauvoo. On the banks of the Mississippi in Illinois, the early Mormons built a religious utopia, establishing their own army and writing their own constitution.

For those offenses and others—including the introduction of polygamy, which was bitterly opposed by Emma Smith, the iron-willed first wife of Joseph Smith—the surrounding population violently ejected the Mormons, sending them on their flight to Utah. Throughout his absorbing chronicle, Park shows how the Mormons of Nauvoo were representative of their era, and in doing so elevates Mormon history into the American mainstream.
Show more
Show less

History Ago Go New Books Network The Age of Jackson