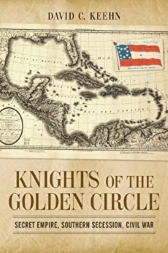 Based on years of exhaustive and meticulous research, David C. Keehn’s study provides the first comprehensive analysis of the Knights of the Golden Circle, a secret southern society that initially sought to establish a slave-holding empire in the “Golden Circle” region of Mexico, the Caribbean, and Central America. Keehn reveals the origins, rituals, structure, and complex history of this mysterious group, including its later involvement in the secession movement. Members supported southern governors in precipitating disunion, filled the ranks of the nascent Confederate Army, and organized rearguard actions during the Civil War.

The Knights of the Golden Circle emerged in 1858 when a secret society formed by a Cincinnati businessman merged with the pro-expansionist Order of the Lone Star, which already had 15,000 members.

The following year, the Knights began publishing their own newspaper and established their headquarters in Washington, D.C. In 1860, during their first attempt to create the Golden Circle, several thousand Knights assembled in southern Texas to “colonize” northern Mexico. Due to insufficient resources and organizational shortfalls, however, that filibuster failed.

Later, the Knights shifted their focus and began pushing for disunion, spearheading prosecession rallies, and intimidating Unionists in the South. They appointed regional military commanders from the ranks of the South’s major political and military figures, including men such as Elkanah Greer of Texas, Paul J. Semmes of Georgia, Robert C. Tyler of Maryland, and Virginius D. Groner of Virginia. Followers also established allies with the South’s rabidly prosecession “fire-eaters,” which included individuals such as Barnwell Rhett, Louis Wigfall, Henry Wise, and William Yancey.

According to Keehn, the Knights likely carried out a variety of other clandestine actions before the Civil War, including attempts by insurgents to take over federal forts in Virginia and North Carolina, the activation of prosouthern militia around Washington, D.C., and a planned assassination of Abraham Lincoln as he passed through Baltimore in early 1861 on the way to his inauguration. Once the fighting began, the Knights helped build the emerging Confederate Army and assisted with the pro-Confederate Copperhead movement in northern states. With the war all but lost, various Knights supported one of their members, John Wilkes Booth, in his plot to assassinate President Lincoln.

Keehn’s fast-paced, engaging narrative demonstrates that the Knights’ influence proved more substantial than historians have traditionally assumed and provides a new perspective on southern secession and the outbreak of the Civil War.