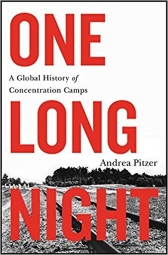 A powerful exploration of the evolution of a harrowing phenomenon that forever changed the landscape of conflict in the twentieth century: the concentration and work camps

Concentration camps–the preemptive communal detention of innocent civilians–first took foothold in Cuba in the late 1800s when Spain’s Captain General Valeriano Weyler drove a half million Cuban refugees into makeshift camps, ultimately killing over 100,000 of them through starvation and disease. Although Teddy Roosevelt and President McKinley condemned such tactical atrocities, the U.S. would establish concentration camps of its own in the Philippines just two years later, leading to the deaths of 11,000 people.

These colonial experiments paved the way for the worldwide internment of foreigners during World War I, followed by the extreme horrors of Nazi Germany and the Gulag. Yet greater consciousness and condemnation proved ineffective during the post-war years, as China and Korea soon adopted camps of their own, and the British continued their use overseas. Even Guantanamo Bay, established in 1898 partially in response to the savage abuses of the first camps, echoes their philosophy today in the detention of prisoners who have not been charged.

Far from being an exclusively World War II tool for perpetrating genocide, camps have existed for more than 100 years, recurring with appalling frequency. Shocking, powerful, and necessary, One Long Night seeks to answer the question of how these atrocities continued through the years after worldwide exposure, condemnation, and the solemn promise of “never again.”

Why Is This Happening? with Chris Hayes
A History of Concentration Camps with Andre Pitzer
7/2/19        58 min

New Books Network Time to Eat the Dogs Why Is This Happening? with Chris Hayes

The Light that Failed: Why the West is Losing the Fight for Democracy

The Ratline: The Exalted Life and Mysterious Death of a Nazi Fugitive

The Scythians: Nomad Warriors of the Steppe

Sapiens: A Brief History of Humankind