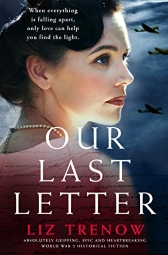 From the New York Times bestselling author comes an enthralling historical story inspired by true events – a brilliant, lonely young man and the ordinary English girl who changes his world forever – for readers who loved The Ragged Edge of Night, All the Light We Cannot See and The Nightingale.

1937, England. Kathleen Motts grew up in a house just across the water from the secretive airbase, Bawdsey Manor. As warplanes surge towards her home and despite pleas from their parents, she and her brother enlist: Mark as a fighter pilot and Kath as one of the first female radar operators, keeping him safe.


Vikram Mackensie is quiet, exceptional at maths and music, and always the outsider. When he’s recruited for a top-secret war project at Bawdsey Manor, Vic’s chance to belong has arrived at last. He may only be half-British, but he vows that his new radar system will save the country he loves.

From their first meeting on windy cliffs above a rocky beach, Kath arrives like a blaze of warmth into Vic’s grey life and turns the colour back on. As the war intensifies, so do Kath and Vic’s feelings for each other. But fate intervenes one dark night. Mark is flying a desperate mission over Germany when Vic’s radar system fails.

In the early hours, Kath is working hard to keep her brother safe, like she has done night after night. When she sees an aircraft acting strangely, she has no choice but to call it in to be shot down. The next morning, Mark never makes it home and Kath feels like the sky is falling around her. Grief eats her from the inside – what if she killed her own brother and Vic is to blame too? In the middle of this perilous war, Kath and Vic only have each other. Is their love strong enough to survive the unforgiveable?

A heartbreaking and gripping novel, Our Last Letter shows that even in humanity’s darkest moments, light and love will find a way.

How Much of These Hills Is Gold

The Shadow King: A Novel