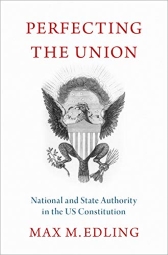 For most of the twentieth century, the American founding has been presented as a struggle between social classes over issues arising primarily within, rather than outside, the United States. But in recent years, new scholarship has instead turned to the international history of the American union to interpret both the causes and the consequences of the US Constitution.

In Perfecting the Union, Max M. Edling argues that the Constitution was created to defend US territorial integrity and the national interest from competitors in the western borderlands and on the Atlantic Ocean, and to defuse inter-state tension within the union. By replacing the defunct Articles of Confederation, the Constitution profoundly transformed the structure of the American union by making the national government more effective. But it did not transform the fundamental purpose of the union, which remained a political organization designed to manage inter-state and international relations. And in contrast to what many scholars claim, it was never meant to eclipse the state governments.

The Constitution created a national government but did not significantly extend its remit. The result was a dual structure of government, in which the federal government and the states were both essential to the people’s welfare. Getting the story about the Constitution straight matters, Edling claims, because it makes possible a broader assessment of the American founding as both a transformative event, aiming at territorial and economic expansion, and as a conservative event, aiming at the preservation of key elements of the colonial socio-political order.
Show more
Show less

The Words That Made Us: America’s Constitutional Conversation, 1760-1840

A Question of Standing: The History of the CIA