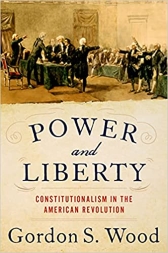 The half century extending from the imperial crisis between Britain and its colonies in the 1760s to the early decades of the new republic of the United States was the greatest and most creative era of constitutionalism in American history, and perhaps in the world. During these decades, Americans
explored and debated all aspects of politics and constitutionalism–the nature of power, liberty, representation, rights, the division of authority between different spheres of government, sovereignty, judicial authority, and written constitutions. The results of these issues produced institutions
that have lasted for over two centuries.

In this new book, eminent historian Gordon S. Wood distills a lifetime of work on constitutional innovations during the Revolutionary era. In concise form, he illuminates critical events in the nation’s founding, ranging from the imperial debate that led to the Declaration of Independence to the
revolutionary state constitution making in 1776 and the creation of the Federal Constitution in 1787. Among other topics, he discusses slavery and constitutionalism, the emergence of the judiciary as one of the major tripartite institutions of government, the demarcation between public and private,
and the formation of states’ rights.

Here is an immensely readable synthesis of the key era in the making of the history of the United States, presenting timely insights on the Constitution and the nation’s foundational legal and political documents.
Show more
Show less

Thinking in Public with Albert Mohler
A New Order of the Ages Indeed: A Conversation With Historian Gordon S. Wood About the U.S. Constitution and the American Revolution
10/6/21         50 min

The Brussels Effect: How the European Union Rules the World