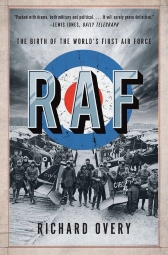 “Packed with drama, both military and political.… It will surely prove definitive.” —Lewis Jones, Daily Telegraph

This compact, masterful work by an outstanding historian marks a pivotal moment in military history: the birth of Britain’s Royal Air Force. Writing with great clarity, Richard Overy shows how the RAF emerged from the deadly stalemate of trench warfare during World War I. With German bombers attacking British cities by 1917, Prime Minister David Lloyd George and his minister of munitions, Winston Churchill, navigated the organizational breakthrough that made the RAF an independent force in spring 1918. The RAF would prove highly influential in the development of air power around the world.