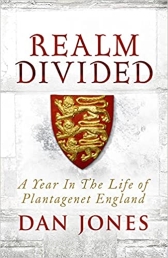 A vivid, in-the-round portrait of English society in the year of Magna Carta, from the best-selling author of The Plantagenets

England in 1215. This was not just the year of Magna Carta and King John’s war with his barons, but a year of crusading and church reform, of foreign wars and dramatic sieges, of trade and treachery; a year in which London would be stormed by angry barons; England would be invaded by a French army; and a supposedly impregnable castle would be brought down with burning pig fat. But this was also a year in which life, for most people, just went on. Thus 1215 opens a window onto everyday life in the thirteenth century: home and church, love and marriage, education and agriculture, outlawry and adventure. It offers a vivid and authoritative portrait—from royal court to peasant wedding—of medieval life in the round, as well as an exhilarating and revelatory exploration of the big themes of politics, warfare, religion, feudalism, mercantilism, travel, and the law in a transformative year in English history.

The White Ship: Conquest, Anarchy and the Wrecking of Henry I’s Dream

The Bright Ages: A New History of Medieval Europe