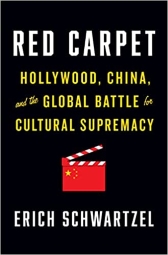 “This is a fascinating book. It will educate you. Schwartzel has done some extraordinary reporting.”  — The New York Times Book Review

“In this highly entertaining but deeply disturbing book, Erich Schwartzel demonstrates the extent of our cultural thrall to China. His depiction of the craven characters, American and Chinese, who have enabled this situation represents a significant feat of investigative journalism. His narrative is about not merely the movie business, but the new world order.” —Andrew Solomon, author of Far from the Tree and The Noonday Demon

An eye-opening and deeply reported narrative that details the surprising role of the movie business in the high-stakes contest between the U.S. and China

From trade to technology to military might, competition between the United States and China dominates the foreign policy landscape. But this battle for global influence is also playing out in a strange and unexpected arena: the movies.

The film industry, Wall Street Journal reporter Erich Schwartzel explains, is the latest battleground in the tense and complex rivalry between these two world powers. In recent decades, as China has grown into a giant of the international economy, it has become a crucial source of revenue for the American film industry. Hollywood studios are now bending over backward to make movies that will appeal to China’s citizens—and gain approval from severe Communist Party censors. At the same time, and with America’s unwitting help, China has built its own film industry into an essential arm of its plan to export its national agenda to the rest of the world. The competition between these two movie businesses is a Cold War for this century, a clash that determines whether democratic or authoritarian values will be broadcast most powerfully around the world.

Red Carpet is packed with memorable characters who have—knowingly or otherwise—played key roles in this tangled industry web: not only A-list stars like Matt Damon, Angelina Jolie, and Richard Gere but also eccentric Chinese billionaires, zany expatriate filmmakers, and starlets who disappear from public life without explanation or trace. Schwartzel combines original reporting, political history, and show-biz intrigue in an exhilarating tour of global entertainment, from propaganda film sets in Beijing to the boardrooms of Hollywood studios to the living rooms in Kenya where families decide whether to watch an American or Chinese movie. Alarming, occasionally absurd, and wildly entertaining, Red Carpet will not only alter the way we watch movies but also offer essential new perspective on the power struggle of this century.

Made in China: A Prisoner, an SOS Letter, and the Hidden Cost of America’s Cheap Goods

The Oil Wars Myth: Petroleum and the Causes of International Conflict