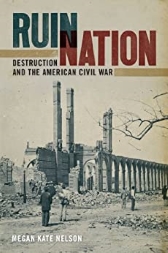 During the Civil War, cities, houses, forests, and soldiers’ bodies were transformed into “dead heaps of ruins,” novel sights in the southern landscape. How did this happen, and why? And what did Americans—northern and southern, black and white, male and female—make of this proliferation of ruins? Ruin Nation is the first book to bring together environmental and cultural histories to consider the evocative power of ruination as an imagined state, an act of destruction, and a process of change.

Megan Kate Nelson examines the narratives and images that Americans produced as they confronted the war’s destructiveness.

Architectural ruins—cities and houses—dominated the stories that soldiers and civilians told about the “savage” behavior of men and the invasions of domestic privacy. The ruins of living things—trees and bodies—also provoked discussion and debate. People who witnessed forests and men being blown apart were plagued by anxieties about the impact of wartime technologies on nature and on individual identities.

The obliteration of cities, houses, trees, and men was a shared experience. Nelson shows that this is one of the ironies of the war’s ruination—in a time of the most extreme national divisiveness people found common ground as they considered the war’s costs. And yet, very few of these ruins still exist, suggesting that the destructive practices that dominated the experiences of Americans during the Civil War have been erased from our national consciousness.
Show more
Show less

Ways and Means: Lincoln and His Cabinet and the Financing of the Civil War