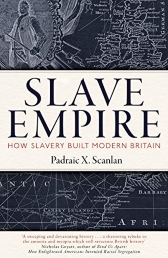 ‘Slave Empire is lucid, elegant and forensic. It deals with appalling horrors in cool and convincing prose.’
The Economist

Slave Empire puts enslaved people at the centre the British empire in the eighteenth and nineteenth centuries. In intimate, human detail, Padraic Scanlon shows how British imperial power and industrial capitalism were inextricable from plantation slavery. With vivid original research and careful synthesis of innovative historical scholarship, Slave Empire shows that British freedom and British slavery were made together.