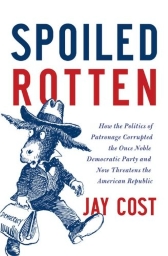 A popular columnist for The Weekly Standard, conservative journalist Jay Cost now offers a lively, candid, diligently researched revisionist history of the Democratic Party. In Spoiled Rotten, Cost reveals that the national political organization, first formed by Andrew Jackson in 1824, that has always prided itself as the party of the poor, the working class, the little guy is anything but that—rather, it’s a corrupt tool of special interest groups that feed off of the federal government. A remarkable book that belongs on every politically aware American’s bookshelf next to Jonah Goldberg’s Liberal Fascism and The Forgotten Man by Amity Shlaes, Spoiled Rotten exposes the Democratic Party as a modern-day national Tammany Hall and indisputably demonstrates why it can no longer be trusted with the power of government.

Un-Trumping America: A Plan to Make America a Democracy Again

The Decadent Society: How We Became the Victims of Our Own Success

Abolish Silicon Valley: How to Liberate Technology from Capitalism

Kill Switch: The Rise of the Modern Senate and the Crippling of American Democracy