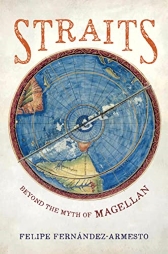 An uncompromising study of the fictions, the failures, and the real man behind the myth of Magellan.

With Straits, celebrated historian Felipe Fernández-Armesto subjects the surviving sources to the most meticulous scrutiny ever, providing a timely and engrossing biography of the real Ferdinand Magellan. The truth that Fernández-Armesto uncovers about Magellan’s life, his character, and the events of his ill-fated voyage offers up a stranger, darker, and even more compelling narrative than the fictional version that has been celebrated for half a millennium.

Magellan did not attempt—much less accomplish—a journey around the globe. In his lifetime he was abhorred as a traitor, reviled as a tyrant, self-condemned to destruction, and dismissed as a failure. Straits untangles the myths that made Magellan a hero and discloses the reality of the man, probing the passions and tensions that drove him to adventure and drew him to disaster. We see the mutations of his character: pride that became arrogance, daring that became recklessness, determination that became ruthlessness, romanticism that became irresponsibility, and superficial piety that became, in adversity, irrational exaltation. As the real Magellan emerges, so do his real ambitions, focused less on circumnavigating the world or cornering the global spice market than on exploiting Filipino gold. Straits is a study in failure and the paradox of Magellan’s career, showing that renown is not always a reflection of merit but often a gift and accident of circumstance.
Show more
Show less

The Viking Heart: How Scandinavians Conquered the World

Conquering The Pacific: An Unknown Mariner and the Final Great Voyage of the Age of Discovery