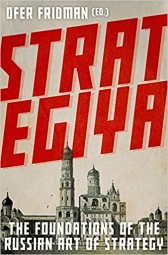 In recent years, Western experts have generally portrayed the Kremlin’s actions as either strategic or tactical. Yet this proposition raises a very important question: how closely does the West’s interpretation of Russian strategy reflect the country’s own definitions?

While many military historians have sought to interpret Russian strategy, Strategiya takes a different approach. It brings together, in English, the classic works of the Russian art of strategy, which were rediscovered after the collapse of the Soviet Union. Instead of explaining his analysis of Russia’s contemporary strategy, Ofer Fridman offers his translation of and commentary upon the founding texts of Russia’s own Clausewitzes, Baron Jominis and Liddell Harts, who have been inspiring Russian strategic thinking—both its conceptualisation and its implementation—from the moment Moscow rejected the exclusive role of Marxism-Leninism in strategic affairs.

Russian contemporary strategists draw their inspiration from three main schools of thought. While works by Soviet military thinkers have already been translated into English, those by both Imperial strategists and military thinkers in exile have remained almost inaccessible to the Western reader.
Filling this lacuna, Strategiya offers a fascinating glimpse inside the foundations of Russian strategic thought and practice.
Show more
Show less

The Future of War

The Future Is History: How Totalitarianism Reclaimed Russia