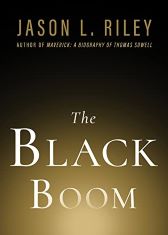 Economic inequality continues to be one of the most hotly debated topics in America, but there has been relatively little discussion of the fact that black-white gaps in joblessness, income, poverty, and other measures were shrinking prior to the pandemic.

Why was it happening, and why did this phenomenon go unacknowledged by so much of the media?

In The Black Boom, Jason L. Riley—acclaimed Wall Street Journal columnist and senior fellow at the Manhattan Institute—digs into the data and concludes that the economic lives of black people improved significantly under policies put into place during the Trump administration. To acknowledge as much is not to endorse the 45th president but rather to champion policies that achieve a clear moral objective shared by most Americans.

As Riley argues in The Black Boom: “Prior to the Covid-19 pandemic of 2020, the economic fortunes of blacks improved under Trump to an extent that was not only unseen under Obama but unseen going back several generations. Black unemployment and poverty reached historic lows, and black wages increased at a faster clip than white wages.”

Less inequality is something that everyone wants, but disapproval of Trump’s personality and methods too often skewed the media’s appraisal of effective policies advocated by his administration. If we want to make real progress in improving the lives of low-income minorities, says Riley, we must look beyond our partisan differences at what works and keep doing it. Unfortunately, many press outlets were unable or unwilling to do that.

As The Black Boom notes: “Political reporters were not unaware of this data. Rather, they chose to ignore or downplay it because it was inconvenient. In their view, Trump, because he was a Republican and because he was Trump, had it in for blacks, and thus his policy preferences would be harmful to minorities.

To highlight the fact that significant racial disparities were narrowing on his watch—that the administration’s tax and regulatory reforms were mainly boosting the working and middle classes rather than ‘the rich’—would have undermined a narrative that the media preferred to advance, regardless of its veracity.”

As with previous books in our New Threats to Freedom series, The Black Boom includes two essays from prominent experts who take issue with the author’s perspective. Juan Williams, a veteran journalist, and Wilfred Reilly, a political scientist, contribute thoughtful responses to Riley and show that it is possible to share a deep concern for disadvantaged groups in our society even while disagreeing on how best to help them.

The Black Boom exemplifies the calm, rational dialogue that Americans want and need at this moment in our history to understand which public policies best promote upward mobility for everyone.

CSPAN After Words Matt Lewis and the News