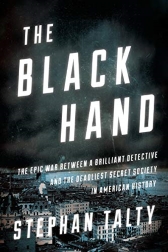 This “gripping account” of the early 20th century organized crime ring chronicles “a lurid and little-known episode in American history” (The Washington Post).

Beginning in the summer of 1903, an insidious crime wave stirred New York City, then the entire country, into panic. The children of Italian immigrants were being kidnapped and dozens of innocent victims gunned down. Bombs tore apart tenement buildings. Judges, senators, Rockefellers, and society matrons were threatened with gruesome deaths.

The perpetrators’ only calling card was the symbol of a black hand. Standing between the American public and the Society of the Black Hand was Joseph Petrosino. Dubbed “the Italian Sherlock Holmes,” Petrosino was an ingenious detective and master of disguise. As the crimes grew ever more bizarre, Petrosino and his all-Italian police squad raced to capture members of the secret society before the nation’s anti-immigrant tremors exploded into catastrophe.

The Black Hand is a “taut, brisk, and very cinematic” true crime history of America at the dawn of the 20th century (Newsday).