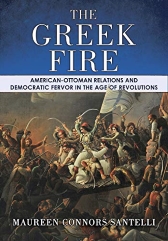 The Greek Fire examines the United States’ early global influence as the fledgling nation that inserted itself in conflicts that were oceans away. Maureen Connors Santelli focuses on the American fascination with and involvement in the Greek Revolution in the 1820s and 1830s. That nationalist movement incited an American philhellenic movement that pushed the borders of US interests into the eastern Mediterranean and infused a global perspective into domestic conversations concerning freedom and reform.

Perceiving strong cultural, intellectual, and racial ties with Greece, American men and women identified Greece as the seedbed of American democracy and a crucial source of American values.

From Maryland to Missouri and Maine to Georgia, grassroots organizations sent men, money, and supplies to aid the Greeks. Defending the modern Greeks from Turkish slavery and oppression was an issue on which northerners and southerners agreed. Philhellenes, often led by women, joined efforts with benevolence and missionary groups and together they promoted humanitarianism, education reform, and evangelism. Public pressure on the US Congress, however, did not result in intervention on behalf of the Greeks. Commercial interests convinced US officials, who wished to cultivate commercial ties with the Ottomans, to remain out of the conflict.

The Greek Fire analyzes the role of Americans in the Greek Revolution and the aftermath of US involvement. In doing so, Santelli revises understandings of US involvement in foreign affairs, and she shows how diplomacy developed at the same time as Americans were learning what it meant to be a country, and what that country stood for.