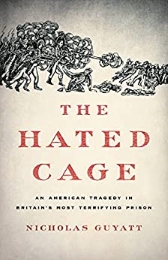 After the War of 1812, more than five thousand American sailors were marooned in Dartmoor Prison on a barren English plain; the conflict was over but they had been left to rot by their government. Although they shared a common nationality, the men were divided by race: nearly a thousand were Black, and at the behest of the white prisoners, Dartmoor became the first racially segregated prison in US history.

The Hated Cage documents the extraordinary but separate communities these men built within the prison—and the terrible massacre of nine Americans by prison guards that destroyed these worlds. As white people in the United States debated whether they could live alongside African Americans in freedom, could Dartmoor’s Black and white Americans band together in captivity? Drawing on extensive new material, The Hated Cage is a gripping account of this forgotten history.

Aspects of History Travels Through Time

Revolver: Sam Colt and the Six-Shooter That Changed America