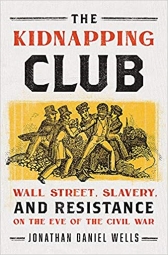 In a rapidly changing New York, two forces battled for the city’s soul: the pro-slavery New Yorkers who kept the illegal slave trade alive and well, and the abolitionists fighting for freedom.

We often think of slavery as a southern phenomenon, far removed from the booming cities of the North. But even though slavery had been outlawed in Gotham by the 1830s, Black New Yorkers were not safe. Not only was the city built on the backs of slaves; it was essential in keeping slavery and the slave trade alive.

In The Kidnapping Club, historian Jonathan Daniel Wells tells the story of the powerful network of judges, lawyers, and police officers who circumvented anti-slavery laws by sanctioning the kidnapping of free and fugitive African Americans. Nicknamed “The New York Kidnapping Club,” the group had the tacit support of institutions from Wall Street to Tammany Hall whose wealth depended on the Southern slave and cotton trade. But a small cohort of abolitionists, including Black journalist David Ruggles, organized tirelessly for the rights of Black New Yorkers, often risking their lives in the process.

Taking readers into the bustling streets and ports of America’s great Northern metropolis, The Kidnapping Club is a dramatic account of the ties between slavery and capitalism, the deeply corrupt roots of policing, and the strength of Black activism.

This Week in Black History, Society, and Culture
Interview with Jonathan Daniel Wells on his Book The Kidnapping Club
2/14/21        67 min

American Republics: A Continental History of the United States 1783 – 1850

A Shot in the Moonlight: How a Freed Slave and a Confederate Soldier Fought for Justice in the Jim Crow South