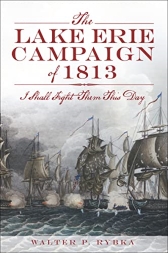 On September 10, 1813, the hot, still air that hung over Lake Erie was broken by the sounds of sharp conflict. Led by Oliver Hazard Perry, the American fleet met the British, and though they sustained heavy losses, Perry and his men achieved one of the most stunning victories in the War of 1812. Author Walter Rybka traces the Lake Erie Campaign from the struggle to build the fleet in Erie, Pennsylvania, during the dead of winter and the conflict between rival egos of Perry and his second in command, Jesse Duncan Elliott, through the exceptionally bloody battle that was the first U.S. victory in a fleet action. With the singular perspective of having sailed the reconstructed U.S. brig Niagara for over twenty years, Rybka brings the knowledge of a shipmaster to the story of the Lake Erie Campaign and the culminating Battle of Lake Erie.

Bunker Hill: A City, a Siege, a Revolution