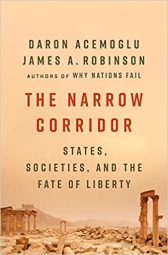 “Why is it so difficult to develop and sustain liberal democracy? The best recent work on this subject comes from a remarkable pair of scholars, Daron Acemoglu and James A. Robinson. In their latest book, The Narrow Corridor, they have answered this question with great insight.” -Fareed Zakaria, The Washington Post

From the authors of the international bestseller Why Nations Fail, a crucial new big-picture framework that answers the question of how liberty flourishes in some states but falls to authoritarianism or anarchy in others—and explains how it can continue to thrive despite new threats.

In Why Nations Fail, Daron Acemoglu and James A. Robinson argued that countries rise and fall based not on culture, geography, or chance, but on the power of their institutions. In their new book, they build a new theory about liberty and how to achieve it, drawing a wealth of evidence from both current affairs and disparate threads of world history.

Liberty is hardly the “natural” order of things. In most places and at most times, the strong have dominated the weak and human freedom has been quashed by force or by customs and norms. Either states have been too weak to protect individuals from these threats, or states have been too strong for people to protect themselves from despotism. Liberty emerges only when a delicate and precarious balance is struck between state and society.

There is a Western myth that political liberty is a durable construct, arrived at by a process of “enlightenment.” This static view is a fantasy, the authors argue. In reality, the corridor to liberty is narrow and stays open only via a fundamental and incessant struggle between state and society: The authors look to the American Civil Rights Movement, Europe’s early and recent history, the Zapotec civilization circa 500 BCE, and Lagos’s efforts to uproot corruption and institute government accountability to illustrate what it takes to get and stay in the corridor. But they also examine Chinese imperial history, colonialism in the Pacific, India’s caste system, Saudi Arabia’s suffocating cage of norms, and the “Paper Leviathan” of many Latin American and African nations to show how countries can drift away from it, and explain the feedback loops that make liberty harder to achieve.

Today we are in the midst of a time of wrenching destabilization. We need liberty more than ever, and yet the corridor to liberty is becoming narrower and more treacherous. The danger on the horizon is not “just” the loss of our political freedom, however grim that is in itself; it is also the disintegration of the prosperity and safety that critically depend on liberty. The opposite of the corridor of liberty is the road to ruin.

The Light that Failed: Why the West is Losing the Fight for Democracy

The Aristocracy of Talent: How Meritocracy Made the Modern World