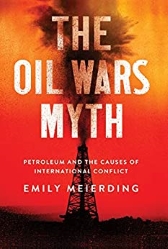 Do countries fight wars for oil? Given the resource’s exceptional military and economic importance, most people assume that states will do anything to obtain it. Challenging this conventional wisdom, The Oil Wars Myth reveals that countries do not launch major conflicts to acquire petroleum resources. Emily Meierding argues that the costs of foreign invasion, territorial occupation, international retaliation, and damage to oil company relations deter even the most powerful countries from initiating “classic oil wars.” Examining a century of interstate violence, she demonstrates that, at most, countries have engaged in mild sparring to advance their petroleum ambitions.

The Oil Wars Myth
elaborates on these findings by reassessing the presumed oil motives for many of the twentieth century’s most prominent international conflicts: World War II, the two American Gulf wars, the Iran–Iraq War, the Falklands/Malvinas War, and the Chaco War. These case studies show that countries have consistently refrained from fighting for oil. Meierding also explains why oil war assumptions are so common, despite the lack of supporting evidence. Since classic oil wars exist at the intersection of need and greed—two popular explanations for resource grabs—they are unusually easy to believe in.

The Oil Wars Myth will engage and inform anyone interested in oil, war, and the narratives that connect them.

Military History Inside Out The Lawfare Podcast

The Blue Age: How the US Navy Created Global Prosperity–And Why We’re in Danger of Losing It

Wireless Wars: China’s Dangerous Domination of 5G and How We’re Fighting Back