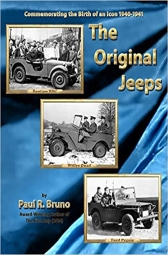 PREMISE OF THE ORIGINAL JEEPS

The spring and summer of 1940 witnessed the resounding defeats of the French army and British Expeditionary Force at the hands of modernized German troops, designed to take advantage of the latest advances in technology. These included mobile vehicles and tanks used in formation to blast through enemy lines, as well as combined ground and air tactics. The evacuation of the British from Dunkirk and the final defeat of their French allies in June 1940 left only a thin line of English fighter planes between that island nation and total defeat.

Meanwhile, leaders of the United States Army, decimated by demobilization after World War I and budget cuts during the Great Depression, knew they were completely unprepared for this new type of mobile warfare called “blitzkrieg,” a German term meaning “lightning war.” Though experts in the U.S. Army had worked from the end of World War I to develop a combination light weapons carrier and command and reconnaissance vehicle, no perfect model had yet been developed by 1940. In June of that same year, the Army compiled a list of requirements for a revolutionary new truck to replace the mule as the Army’s primary method of moving troops and small payloads.

The Original Jeeps tells the story of the American Bantam Car Company, Willys Overland-Motors, Inc. and the Ford Motor Company, the three firms who dared to meet the challenge to build pilot models of this extraordinary new vehicle. The efforts by these automotive pioneers represent an astounding story of grit, determination and never-say-die courage that inspires, and ended in the creation of a legend: the Jeep.

SYNOPSIS OF THE ORIGINAL JEEPS

In 1940, with blitzkrieg raging in Europe, the US Army proceeded on a mission to replace the 3-wheel motorcycle with side car and…the mule! The result was the iconic Jeep. With “The Original Jeeps”, award-winning Author, Paul R. Bruno, commemorates the 80th anniversary of the car—a major reason the Allies won WWII with a detailed recounting of the creation of the first three Jeeps. Three car manufacturers were involved. The winner of the original RFP was bankrupt little American Bantam Car Company, Butler, PA, which designed the car with the Army. They then set about building a pilot model. At risk of penalty, they built their vehicle in an astonishing 49 days and their pilot model successfully completed all the Army’s grueling tests.

Next the Army spread the wealth to two other companies in order to maximize the design potential for high-level performance under extreme battle conditions. The second company to deliver a prototype was Willys-Overland Motors, Inc. Toledo, OH. However, Willys’ first attempt did not pass the Army’s rigorous evaluation. They were allowed to resubmit another pilot model and that vehicle successfully completed the Army’s testing.

The third manufacturer they solicited was Ford Motor Company, Dearborn, MI. Their pilot was built, submitted, and like Bantam, passed Army muster on their first try.

Then the real competition began for who would build the vehicles en masse. Noteworthy to point out, however, that Bantam never even had a clue that it was in a competition as it built and submitted its pilot model.

Between them, Bantam innovated 4×4 technology with Spicer Company, Toledo, for use in small trucks and cars which is ever-present today. Willys and Ford added their modifications through their work with Spicer.

In all, they developed just what the US armed services needed to win the war: a standalone weapons delivery carrier, as well as a nimble off-track mobile field battle-station vehicle. The Jeep has stood the test of time.”

Spearhead: An American Tank Gunner, His Enemy, and a Collision of Lives in World War II