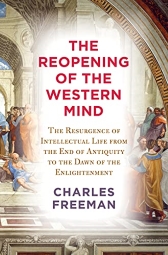 A monumental and exhilarating history of European thought from the end of Antiquity to the beginning of the Enlightenment—500 to 1700 AD—tracing the arc of intellectual history as it evolved, setting the stage for the modern era.

Charles Freeman, lauded historical scholar and author of The Closing of the Western Mind (“A triumph”—The Times [London]), explores the rebirth of Western thought in the centuries that followed the demise of the classical era. As the dominance of Christian teachings gradually subsided over time, a new open-mindedness made way for the ideas of morality and theology, and fueled and formed the backbone of the Western mind of the late Middle Ages, the Renaissance, and beyond.

In this wide-ranging history, Freeman follows the immense intellectual development that culminated in the Enlightenment, from political ideology to philosophy and theology, as well as the fine arts and literature. He writes, in vivid detail, of how Europeans progressed from the Christian-minded thinking of Saint Augustine to the more open-minded later scholars, such as Michel de Montaigne, leading to a broader, more “humanist” way of thinking.

He explores how the discovery of America fundamentally altered European conceptions of humanity, religion, and science; how the rise of Protestantism and the Reformation profoundly influenced the tenor of politics and legal systems, with enormous repercussions; and how the radical Christianity of philosophers such as Spinoza affected a rethinking of the concept of religious tolerance that has influenced the modern era ever since.
Show more
Show less

The Women of Rothschild: The Untold Story of the World’s Most Famous Dynasty

The Dawn of Everything: A New History of Humanity

The Wolf Age: The Vikings, the Anglo-Saxons and the Battle for the North Sea Empire