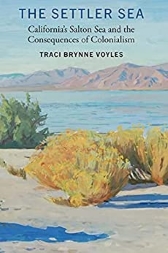 Can a sea be a settler? What if it is a sea that exists only in the form of incongruous, head-scratching contradictions: a wetland in a desert, a wildlife refuge that poisons birds, a body of water in which fish suffocate? Traci Brynne Voyles’s history of the Salton Sea examines how settler colonialism restructures physical environments in ways that further Indigenous dispossession, racial capitalism, and degradation of the natural world. In other words, The Settler Sea asks how settler colonialism entraps nature to do settlers’ work for them.

The Salton Sea, Southern California’s largest inland body of water, occupies the space between the lush agricultural farmland of the Imperial Valley and the austere desert called “America’s Sahara.”

The sea sits near the boundary between the United States and Mexico and lies at the often-contested intersections of the sovereign lands of the Torres Martinez Desert Cahuilla and the state of California. Created in 1905, when overflow from the Colorado River combined with a poorly constructed irrigation system to cause the whole river to flow into the desert, this human-maintained body of water has been considered a looming environmental disaster.

The Salton Sea’s very precariousness—the way it sits uncomfortably between worlds, existing always in the interstices of human and natural influences, between desert and wetland, between the skyward pull of the sun and the constant inflow of polluted water—is both a symptom and symbol of the larger precariousness of settler relationships to the environment, in the West and beyond. Voyles provides an innovative exploration of the Salton Sea, looking to the ways the sea, its origins, and its role in human life have been vital to the people who call this region home.
Show more
Show less

When the Sahara Was Green: How Our Greatest Desert Came to Be

Paradise: One Town’s Struggle to Survive an American Wildfire

A Most Remarkable Creature: The Hidden Life and Epic Journey of the World’s Smartest Birds of Prey