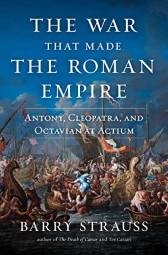 A “splendid” (The Wall Street Journal) account of one of history’s most important and yet little-known wars, the campaign culminating in the Battle of Actium in 31 BC, whose outcome determined the future of the Roman Empire.

Following Caesar’s assassination and Mark Antony’s defeat of the conspirators who killed Caesar, two powerful men remained in Rome—Antony and Caesar’s chosen heir, young Octavian, the future Augustus. When Antony fell in love with the most powerful woman in the world, Egypt’s ruler Cleopatra, and thwarted Octavian’s ambition to rule the empire, another civil war broke out. In 31 BC one of the largest naval battles in the ancient world took place—more than 600 ships, almost 200,000 men, and one woman—the Battle of Actium. Octavian prevailed over Antony and Cleopatra, who subsequently killed themselves.

The Battle of Actium had great consequences for the empire. Had Antony and Cleopatra won, the empire’s capital might have moved from Rome to Alexandria, Cleopatra’s capital, and Latin might have become the empire’s second language after Greek, which was spoken throughout the eastern Mediterranean, including Egypt.

In this “superbly recounted” (The National Review) history, Barry Strauss, ancient history authority, describes this consequential battle with the drama and expertise that it deserves. The War That Made the Roman Empire is essential history that features three of the greatest figures of the ancient world.
Show more
Show less

The Death of Caesar: The Story of History’s Most Famous Assassination