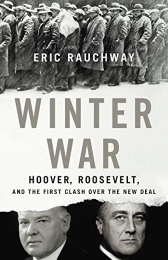 As historian Eric Rauchway shows in Winter War, FDR laid out coherent, far-ranging plans for the New Deal in the months prior to his inauguration. Meanwhile, still-President Hoover, worried about FDR’s abilities and afraid of the president-elect’s policies, became the first comprehensive critic of the New Deal. Thus, even before FDR took office, both the principles of the welfare state, and reaction against it, had already taken form.

Winter War reveals how, in the months before the hundred days, FDR and Hoover battled over ideas and shaped the divisive politics of the twentieth century.
Show more
Show less